The Democratic Resettlement Community (DRC) is located in the North-Eastern part of Swakopmund, Erongo region. It was founded in 2001 by the local municipality as a temporary settlement for people awaiting subsidized housing. But it took until 2013 that the formalization of the DRC has been initiated to provide long awaited housing and services for landless people. However, today houses are half-build, left vacant and remain mainly inaccessible for DRC community members.

During our stay in Namibia we met the DRC committee to hear their perspective of the story. About 20.000 people are living on the site and numbers have been increasing during the last years. Especially people dropping out of temporary contract employment are moving to Swakopmund in order to seek for jobs. On the site people are living in shacks without adequate infrastructure like water, electricity and sanitation. According to David, chairperson of the DRC, these people are “landless, jobless and nothing-less”.

Already in 2006 the missing recognition of poor peoples needs have been stressed by the residents. But it took until 2011 that the idea was raised to organize the community. At this time people gathered at an open space, called the “superkitchen”. The “DRC Consent Group” was set up and a chairperson was elected by community vote. Up to now monthly meeting are held to discuss community issues.

After formation of the “DRC Consent Group” different action were taken to address the unbearable living conditions. For example, the story has been published in the media. The community demonstrated at the local municipality. Then, a petition was send in order to claim adequate services. Unfortunately, the municipality never replied. In the view of constant ignorance, the DRC community proposed not to take part at the forthcoming election.

As an immediate reaction to the protests in 2015 the local municipality set up a plan to build subsidized houses on the site. This was part of the national “Mass Housing Initiative” introduced by the former President Hifikepunye Pohamba, which is budgeted for about N$2 billion. 3000 low to middle income houses were planned, ranging from an estimated construction cost between N$200.000 to N$400.000 per house. Juuso Kambueshe, mayor of Swakopmund, presents the planning as a pro-poor initiative: “The formalization of the DRC will not escape its own achievement of success. We have been truthful and transparent with the electorate regarding the formalization process of the DRC. The installation of bulk services have been on schedule as planned. Thus we can assure residents that we are on par” (New Era 26.03.2014). 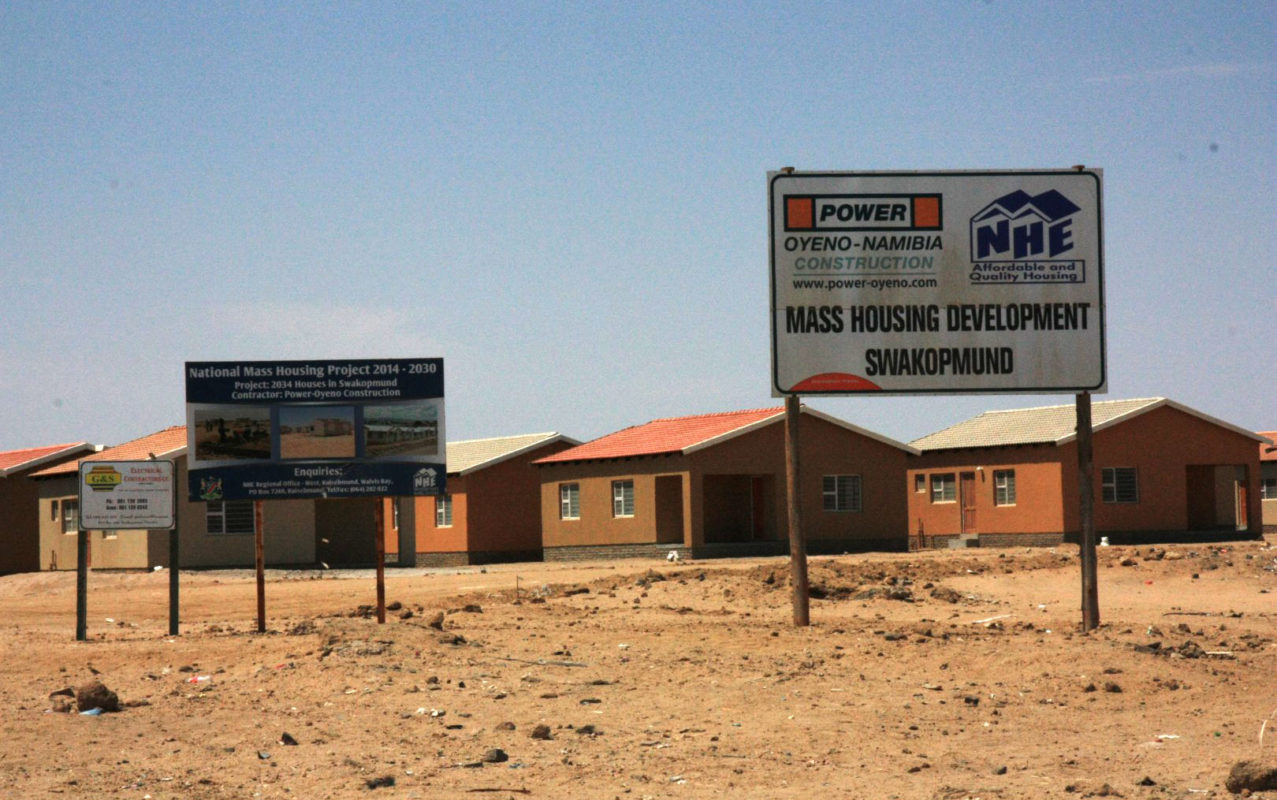 The construction was carried out by the company NHE, who further employed several subcontractors, namely Power-Oyeno, Ferusa and Delta. However, contractors have not been payed and up to now construction has not been completed and houses are left vacant. According to The Namibian (27.08.2015). “So close, yet so far” is reality for thousands of homeless and landless people still awaiting own property

The local municipality offered these houses to the DRC community members. This was done by distributing a registration form, which had to be signed within 90 days. Under the provision of a 60% governmental subsidy, houses were offered at a monthly rate of N$2.300 to N$10.000. However, it became apparent that community members would hardly be able to register as monthly wages only amount to app. N$800 to N$1.200. According to the DRC committee a major point of concern is what is going to happen with people who cannot register. People got very alert when they found out that the refusal of registration would probably lead to forced removal from the site. Prior to the beginning of the construction already 300 people became evicted. Up to now it remains unknown whether further evictions will take place. This directly leads to the question whom are these house build for? According to the DRC committee it is frustrating that issues raised by the poor become a measure to provide subsidized houses for rather rich people.

Again, an inquiry was made at the local municipality. Now, it was not only about service provision, it was about being able to legally stay on the site and to be protected from eviction. This issue has been taken up by the “Legal Assistance Center” (LAC), Windhoek. The LAC conducted an assessment of the governmental planning procedure. As a result a complaint was filed at the local municipality which has not been answered yet.

In the meantime the DRC community still struggles with their insecure situation. They ask for legal advice, financial support as well as training to support their idea. Furthermore, community members actively involved in raising these issues are scared that action may be taken against them. Currently, attempts are made to take party at the upcoming election. However, the registration has not been received yet.